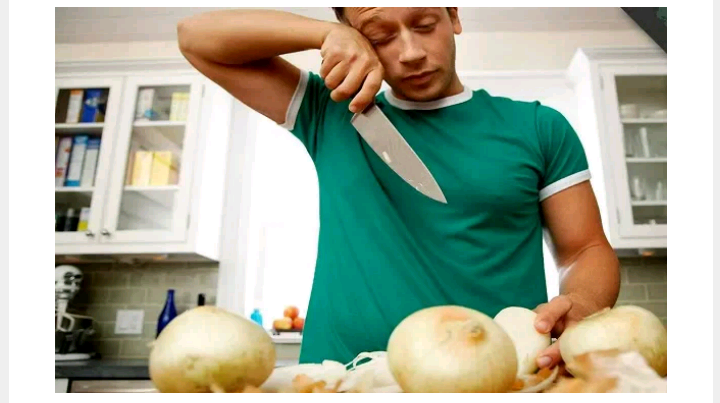 Unless you’ve never cooked, pretty much everyone has at some point in their life, had to cut onion. If like me, you have, then you know it’s a rarity to do the task without letting out a tear or more. Onions contain a chemical called syn-Propanethial-S-oxide. It’s a type of sulphur, and is volatile in nature. This substance is released when you cut your onion, and because it is volatile, syn-Propanethial-S-oxide becomes acidic when it hits the air; it’s the sulphuric acid it produces that hurts the eye. In order for the eye to keep it off, it releases tears to wash off the chemical.

Below are the few tricks you can use to escape shedding tears while cutting onions.

Keep A Spoon In Your Mouth

Weird, but it actually works. As you chop your onion, try putting a spoon in your mouth. Due to the metalic form of a spoon, it’ll keep you from crying. The chemicals in the onion bind to the metal of the spoon before they can get to your eyes.

If you have bread around you, get some in your mouth, but don’t forget to leave some of it hanging off your mouth. It’s believed that the bread would soak up the hurtful chemical before they get to your eyes. Bubble gums also work.

Dip In Water Before You Chop

After peeling off the outer layer of the onion, dip it in water, and leave for a few seconds. The water will draw off some of the harshness of the chemical, so you don’t cry while you chop.

This may seem rather weird unless it’s dark, but you know what they say, ‘drastic times, drastic measures’. So what if you have to light a candle to avoid crying as you chop that onion?

Now, to why this measure is effective. It’s believed that the flame on the candle would get rid of some of the fumes before they get closer to your eyes.

Put In The Fridge

Finally, throw an onion in a refrigerator for about 15 minutes before you chop it. It’s believed that the cold would stop it from releasing the molecules which cause all the problems.

Meet The Man That Invented The Famous Alabukun Powder In 1918

How To Make Your Skin Glow And Beautiful With Tomatoes