The woman whose husband killed their son and buried him with the help of his pastor has spoken out about her ordeal.

His blind pastor, Okeke Eneokwor, was also arrested for leading Onyishi to kill his son. 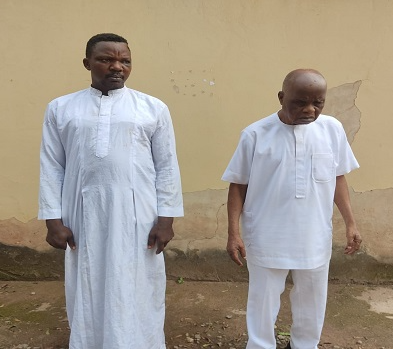 The mother-of-six said she returned to their home at 25 Taylor Avenue Coal Camp, Enugu, on the fateful day to find that Chidalu, who is her 3rd child and second son, was not at home with his siblings.

She said it was unusual because her kids obey instructions and whenever you tell them not to leave the house, they stay put.

She said she came out to ask neighbours if they had seen her 7-year-old son but no one had an idea where he was.

She began calling her husband but he wasn’t picking.

He later picked after a long time and said he had no idea where their son was.

She said her husband, a keke driver, later came home in his keke and saw neighbours sympathising with her as she was crying about her missing son. When asked if he knew where his son went, he kept insisting he didn’t send his son anywhere, neither did he take the boy out.

She said her husband then called his mother to let her know their son was missing.

He left home not long after then called Mama Chidalu on phone, telling her to leave the neighbours and go into the house because most of them are witches and wizards.

Mama Chidalu said she immediately began going from one prayer place to the other, and they all said her son will be found.

Days went by and the son was still not found so Chidi Onyishi reported to the police station two days later that his son was missing.

One Saturday, 14 days after the boy went missing, Mama Chidalu said she was home when her husband came back and asked if she cooked. She gave him food, he ate and slept.

She then heard a knock on the door and when she opened it, she said it was one chairman in the area and he asked to see her husband.

She went inside to wake her husband and as he was about to go out to meet the chairman, Mama Chidalu said she asked to go with him, in case the visitor had information about their son, but he told her not to.

After a while waiting inside, she said she heard noise outside and came out to see a crowd in front of her house, including police vans. She said she then saw the authorities accusing her husband of killing the son for rituals and he was taken away.

Crying, Mama Chidalu said that prior to her husband’s arrest, whenever she’s doing midnight prayers, shouting to God to bring her son home, her husband usually warns her to stop shouting.

She said she then told him on one of those nights that she’s shouting for the child she carried in her womb for 9 months and doesn’t believe that anyone would have entered their house to take the child away.

She said she then begged her husband to tell her if he knows anything about their son’s whereabouts but he threatened to beat her if she asks again.

She said: “He told me ‘If you ask me about Chukwudalu again, I’ll slap you’. That if he kills me here, is there anyone who will ask him why?”

She continued: ” I told him, yes, I don’t have a mother or father to speak for me but Jesus is my mother and father.”

All through the pregnancy, she said she was starving because there was no money for food. She added that even after birth, she had nothing to eat and it was her husband’s mother who begged people for charity before she got food donations.

Asked about the church where her husband “sacrificed” their son, Mama Chidalu, who couldn’t stop weeping, said that her husband, who used to go to Catholic Church with her and the kids, suddenly started going to the pastor’s church and tried to make her go with him but she refused.

She said: “In fact the church bell he rings sometimes, whenever my children ring it, I object and make it clear my kids were born into the Catholic church and children shouldn’t be forced to do what they don’t want. When they grow, they can then decide which church they want to go to but you can’t force a person to your church.”

She continued: “He initially told me he goes to Sabbath church. Later, he said he doesn’t go to Sabbath that he’s a pastor on his own. I didn’t even know it was Olumba Olumba he was going to.

“Because whenever I ask him about the church, he’ll start shouting at me and threatening to slap and kill me.”

According to Enugu Police spokesman, Daniel Ndukwe, Onyishi buried his son in a shallow grave at the bank of a stream in Abakpa-Nike, Enugu.

He fingered Pastor Okeke Eneokwor as an accomplice and confessed that it was at Trans Ekulu, Enugu, that the plan to kill his son was hatched.

Chidi Onyishi led the police to the grave where his son was buried and the body has been exhumed.

Watch the wife speak in the video below.